Libby wore her old green raincoat, the one that draped over her thighs, the hood pulled over her forehead. She held an umbrella above her backpack. I wore my fire engine red windbreaker and broad-brimmed grey hat. We must have looked like two pilgrim clowns.

It was the last Saturday morning in October, and the past week, every morning seemed to start with rain. We were walking in a thunderstorm through the muddy forest to Soda Pininini, where Lloyd Wright Daley had told us we could catch the bus for San José. “Be here ’round nine-thirty,” he’d said. “The bus stops ’bout then.” We sat at one of Lloyd’s tables, drinking café negro, trying to dry off before the bus appeared. We were headed to the city to watch game six of the World Series between Cleveland and Atlanta, our hometown baseball teams, a game I’d dreamed about all my life.

After living in Costa Rica for nearly two months, I hardly thought about life back home. Libby had recently phoned her mother, who talked about Hurricane Opal, the storm that devastated Florida and even knocked down trees and power lines in Atlanta. We found out that a jury had acquitted O. J. Simpson of murder charges. To me, the news seemed like legends. Living without a telephone, radio, television, or even a newspaper, without a car, without mail delivery, without any of the technology or services that organized and informed our lives in the United States, I’d lost track of the modern grid. Had I ever really sat mesmerized in front of a television, watching a Ford Bronco crawl along L.A. freeways followed by a dozen police cars?

And yet I wanted any scraps of news about my beloved baseball.

In October, baseball’s playoff season, I relied on Lloyd for the scores. He subscribed to La Nación, knew that I was rooting for Cleveland, and before I could ask, he’d give me “thumbs up” or “thumbs down.” After my team had clinched the American League pennant, beating Seattle’s star fireball pitcher, at first Lloyd shook his head, turned his thumb down, but then he laughed and said he was teasing.

He couldn’t have known the heart he was toying with.

My team had never made the playoffs, not in my lifetime. But for the first time since 1954, as if the baseball gods had conspired against me, Cleveland reached the World Series. In Costa Rica, I’d followed my heart, taken the big chance with the woman I loved, yet I’d exiled myself just when my boys of summer had finally reached baseball’s Promised Land. I felt like Moses, looking down from the mountaintop at the faraway homeland he’d never set foot upon. I know that sounds silly, but if you’re a baseball fan, you’ll understand. Lucky for me, Libby could cheer for her own hometown, Atlanta.

Why in the world, you’re probably thinking, does this man’s love affair with baseball show up in the middle of his Costa Rican romance? Good question. I could tell you how the long season, featuring almost daily games from early April to late September, requires a serious commitment from players and fans alike, and how emotions range from anguish to joy.

I could delve into baseball’s mysterious design. The distance between each base on a four-cornered “diamond” is ninety feet (why not an even hundred?) yet even stranger, the distance between pitcher and batter (what divine insight or accident could have produced this number?) is exactly sixty-feet six-inches. The game is based on the magical numbers three (think of the Christian Holy Trinity) and four (the ancient base elements of earth, wind, fire, and water). Three “strikes” is an out; there are three outs per inning. Four “balls” is a walk, and the batter is awarded a “free pass” to first base. There are four bases, and the game’s journey starts and ends at “home plate.” Players hit the ball and run around the bases, always circling back home again. As generations of players have improved athletically—growing stronger, faster—their physical evolution has never required an adjustment to the game’s numerical design.

Yet baseball is also a game of infinite dimensions. There is no time clock, and there is no limit to how far the field’s right and left borders extend into the horizon. Others have memorably described baseball’s romantic infinities. In The Iowa Baseball Confederacy, novelist W.P. Kinsella tells the story of two teams that magically continue to tie the score, extending a normal nine-inning game for weeks and months (tie games are merely “suspended” until later; there is no “sudden death” in baseball), as if one game could embody an entire summer’s season. And theoretically, a game of baseball could last forever, since no buzzer or horn ever announces that time has run out.

Or you might know another Kinsella story, made into the 1989 movie Field of Dreams (and based on his novel Shoeless Joe), where a grown man, “Ray” Kinsella, throws away all common sense, listens to voices in his head, and plows under several acres of perfectly good Iowa farmland to build a baseball field. But he builds no “homerun fence.” Instead, the outfield grass ends at what seem to be infinite rows of corn, where famous (and dead) players from the past emerge to play the game they loved, and then, after each game, disappear again back into the corn.

In the movie, after one game, before he disappears between the tall stalks, baseball legend Shoeless Joe Jackson turns and asks Ray, “Is this heaven?”

Near the end of the story, Ray plays catch with his long-dead father, one of the lesser players resurrected from the cornfield. In college, the son resented his old man, wouldn’t even have a game of catch with him. Suddenly, Ray recognizes his father and realizes that he was the one those voices in his head had said would appear when they promised: If you build it, he will come.

I could tell you that, whenever I watch this movie, it makes me cry. I think about my own father, a high school and college all-star who for years was my baseball coach, a man I thought I’d outgrown when I was in college. Only in my thirties—a few years before I left for Costa Rica—had I begun to reconnect with my dad.

In Costa Rica, I told Libby all about my love of baseball. I can’t remember what she might have said, but what I remember for certain, even so many years later, is what she didn’t say. Never once did Libby ridicule me for wasting my time, or demand that I grow up, put away my childish distractions, stop dreaming, and live in the real world.

That was over 20 years ago. Cleveland lost to Atlanta in game six. I waited two more decades for Cleveland to climb back into the World Series (only to lose to the Chicago Cubs, who hadn’t won the series since 1908, so I guess if I’m a true blue baseball fan, I can’t be angry at lovable Cubs fans). But it’s July 12, 2017, Cleveland’s in first place, and I’m giving up my old baseball fan’s lament wait until next year. See you in October! 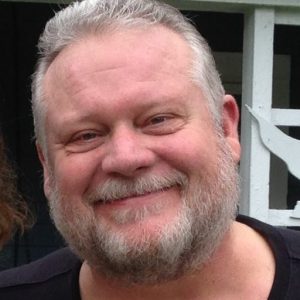 ORDER The Long Road Home at Amazon or directly from Finishing Line Press.

Martin Lammon is Professor Emeritus at Georgia College, where he joined the faculty in 1997 and held the Fuller E. Callaway endowed Flannery O’Connor Chair for 21 years.  There he developed the college’s MFA program in Creative Writing, and founded the literary journal Arts & Letters. He currently lives and works in Atlanta, where he hosts the “Alumni Writers Workshop.”

Listen to a February 2019 interview on Jeremy Uriz’s Is Anything podcast.